Saturday we caught a train to Florence, which is situated in the heart of Tuscany. After spending the night in a sculptor’s apartment, Sunday morning we joined an all-day tour of Tuscany. We boarded a large bus with lots of tourists from around the world: Brazilians, Australians, Brits, Germans, and of course, Americans. Cindy became fast friends with everyone. A nurse, she and her husband had bought the trip in a package deal and were in love with Italy from the start. “Isn’t it just the best!?” she squealed, her red hair shining in the sun.

A couple from Australia were taking a round-the-world honeymoon. They were called up front during lunch and made to force-feed each other almond cookies and dessert wine. A pastor of a large church told us about their huge goal of 2 million souls. They had been holding evangelistic crusades around the world and 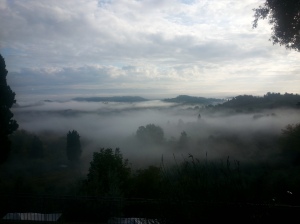 several hundred thousand people had turned their lives over to God.

Daddy told the story of how he and mama met and married, gave some marriage advice, and told everyone to go home and read Ephesians 5. Afterwards, someone remarked. “You two should write a book!” An Australian yelled from the front, “No, a movie!”

The pastor turned around.

“Hey, today is Sunday. Give us a 2 minute sermon.”

So, Daddy did. He shared the gospel of God’s love for the world in two minutes, and then effervescent Cindy piped up. “Well, we’re in a tunnel, so lets’ sing “This Little Light of Mine!’” Half the bus loudly erupted in song and we ended our worship service with laughter.

The tour guides, an Italian woman who spoke fluent English and a Spanish interpreter, were determined to show us every inch of Tuscany.

We set sail from Florence, bused through the elegant streets and then out into the dreamy countryside.

Mama takes a break at a cafe

We stopped at a little village called San Gimignano, where the streets were like cobblestone and one gelato shop had won best in the world. Daddy and I eagerly bought two cones. My sour yogurt one was delicious! We headed from there to Sienna, where there was a huge open square in the middle of town framed by outside eateries, and gorgeous churches of marble and carvings. 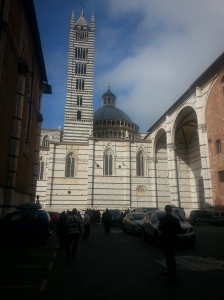 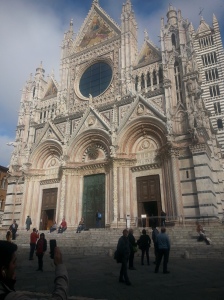 After this we headed to a vineyard for lunch. (For some reason, Daddy didn’t make it into the Tuscany pics:() 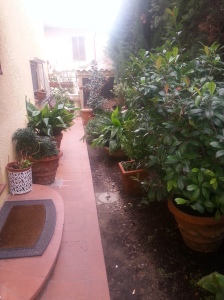 After lunch, we were off to Vinci where we visited a museum and Mama excitedly pointed out invention after invention from the brilliant Leonardo da Vinci. 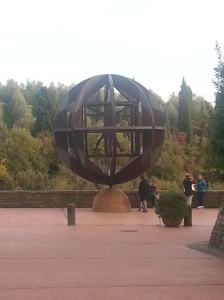 Finally, we made it to Pisa where we staggered off the bus in complete exhaustion to look at the leaning tower, by now, bathed in moon and artificial lighting.

My parents, half-dead and completely delirious from fatigue, saw McDonalds and decided to stop in for a bite. Daddy said he wasn’t really hungry, because “I can go all day without eating or drinking…When I was in New Guinea, we’d walk for hours…” We bought him a burger anyway. Finally, we stumbled back to our bus and went to sleep on the way back to Florence.